I’ve recently taken to making bread[1]. Those connected with me on social media and those who visited our home in the past weeks and months have been suffering from this new obsession of mine, as the former were (and are) flooded with bread pictures (regularly inducing comments like: “When are you going to change your profession?”[2]), while the latter were (and are) systematically forced into tasting the latest creation sitting on our kitchen table. As an apology to all who’ve endured the hardships of being pulled into my bread-making obsession, and as an attempt for myself to make sense of this new-found addiction, I’ve decided to explore what exactly it is about bread-making that inspires me.

First, let me sort out what it’s not: It’s not an old habit or heritage from home. Yes, as a child, I was part of various episodes of bread-making. However, those episodes did not leave a lasting imprint on my attitude towards life[3], but rather evoke vague memories of sticky dough, dried-up crusts, and difficult process discussions. It’s also not me following a fad or a fashion. Yes, recently, I’ve noticed friends and acquaintances on social media being (or getting) passionate about baking bread[4]. However, for a long time, their stories rang puzzling to me – not just comprehensibly (or incomprehensibly) different from my own interests (like others’ excitement about kite surfing, kittens, or iconic pop stars), but somehow eerie, as if I was witnessing others disclosing their liking for mysterious voodoo practices, arcane fertility gods, or secret dark spells[5].

Discarding childhood trauma and conscious (or unconscious?) copy-catting, what else could it be that makes me so enchanted with combining flour, water, some raising agent, and some other bits and pieces into something that eventually looks, smells, and tastes like that edible item we like to call “bread”? 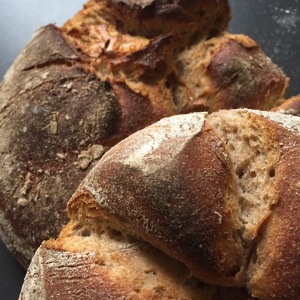 After much soul-searching, here’s what I found:

It’s ancient: Making bread is an ancient art. As soon as mankind had managed to grind some random grains, they mixed them with water, created dough, and baked something like chapati, tortilla, pita, or injera[6]. Ever since, bread has continued to reinvent itself, in an unbroken chain of creations and recreations. So maybe bread-making makes me feel connected with this timeless lineage of human ancestry?

Ingredients are basic: Most ingredients used in making bread are very basic. Water and flour, yeast and salt, seeds and sprouts: All these are relatively unprocessed manifestations of food[7], the primary particles of what feeds our bodies. Bread uses bits and pieces not too far away from what we’d put into our mouths if we were lost in a desert, veld, or jungle. So maybe bread-making makes me feel in touch with the essential elements of what constitutes us as living beings?

It takes planning and patience: Bread recipes always make me cringe at the first paragraph that says something like: “On the previous day, mix water, flour, and salt, and let it sit for at least 20 hours”. Bread offers no workaround to planning (“Do we want to make bread tomorrow?”) and no shortcut to patience (“The dough won’t be ready before tonight.”) – or else, you’ll not get your bread. So maybe bread-making makes me enjoy the immense tardiness of time, never heeding our urges or wishes?

It requires precision: I’ve managed to wreck quite a number of breads by adding too little (or too much) water or salt, misjudging the time needed for letting the dough sit, and under- (or over-) calculating baking hours. Bread has no lenience for lack of precision, it forces us into exactitude, meticulousness, and the painful rigour of following rules. So maybe bread-making makes me appreciate the value of utter refinement?

It is fuelled by continuity: Bread-making, in particular when using sour-dough, is permeated by a notion of continuity, as the sour-dough (once created from flour and water) extends from one loaf to the next, being kept and kindled in between baking sessions, growing more powerful with every instance of being used. Bread is an epitome of uninterruptedness, flowing through variations on taste and visual manifestations. So maybe bread-making makes me stand in awe of what goes on and on? 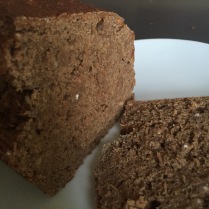 It serves a fundamental need: Bread is among the most elementary (and indispensable) nourishments available to human beings. There were times when bread teamed up with water to give prisoners something to eat, times when it partnered with wine to help religions symbolise deep spiritual truths, and times when it joined forces with circuses to create conditions for keeping citizens happy and in a peaceful mood. So maybe bread-making makes me harbour illusions of serving the needs of others?

It leaves no traces or waste: Compared to other fulfilling pastimes such as silk screen painting, pottery, or adult colouring books, bread-making leaves no other traces than the bread baked, and – once that’s eaten – produces no waste other than the usual waste of human beings processing food. Bread is efficient and effective in how it self-digests across the process of its creation, consumption, and discharge. So maybe bread-making makes me acknowledge the importance of living without garbage?

It’s sensory: Bread-making involves all senses: The touch felt when working the dough, the smell as it bakes, the sight of a loaf as it leaves the oven, the sound of the crust as it breaks, the taste of freshly baked bread (in my personal case, preferably with butter or oil, and with salt). Bread addresses all dimensions of human perception, refuting all attempts at a limiting view of the world. So maybe bread-making makes me indulge in life’s abundance through multi-sensory experiences?

It has an end-product: Bread-making produces something, relatively quickly and relatively reliably. When following the recipe, we cannot help but end up with a loaf of bread a few hours (or days) later. Bread always shows us what comes out of our efforts, with no hesitation, delay, or contamination; it gives honest feedback, straight away, with the closest possible loop between input and output. So maybe bread-making makes me savour the treacherous rewards of seeing immediate results?

Or, maybe, it’s none of the above, and I’m just an insatiable, gluttonous bread-eater with no willingness to accept the convoluted agonies implied in going out to buy bread in over-stuffed stores with poorly regulated air-conditioning systems, disoriented co-shoppers, and amateurish queuing arrangements[8]. 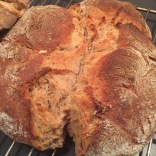 [1] Credits for this development go to my son whose question: “How do you make bread?” started it all, some time back in January.BACK TO TEXT

[2] Which, for the record, I’ve no intention to do. I enjoy making bread as an occasional pastime, but I fear I’d lose all excitement if I had to deliver fresh loaves on a daily basis.BACK TO TEXT

[3] Other than the experiences described here [retrieved Jun 5th, 2016].BACK TO TEXT

[4] In particular, a my former consulting colleague of mine whose breads, buns, and other bakery creations are unequalled in looks (and most likely also in taste, which, unfortunately, I haven’t had the chance to sample yet), and @leitmedium with his peerless enthusiasm about not only trying out, but also explaining recipes (including, at one point, a sour dough manual on his Instagram account [retrieved Jun 5th, 2016]).BACK TO TEXT

[5] I’m fully that this feeling of eeriness might be nothing but a weird disposition of mine, not at all relevant for anybody else on this planet. However, in the (most likely unlikely) case of anyone else encountering similar sentiments in reaction to my bread posts on social media, be assured that you’re not the only one feeling a weird little fuzzy when facing others getting all  animated about baked goods.BACK TO TEXT

[6] There’s a nice “bread” article on Wikipedia with a lot of interesting basic information [retrieved Jun 5th, 2016].BACK TO TEXT

[7] “Relatively”, of course, is relative. Water taken from a tap in Hamburg is not water coming from a spring in the middle of the woods, and flour bought at an organic supermarket is not flour freshly ground on a quern. Still, compared to many other ingredients, most of the ones used in bread-making are still quite close to their source. BACK TO TEXT

[8] And one final remark on process: I started off by using bread-making recipes from the internet (which worked very well). Now, I mostly use the bread-making book “Brot” by Bernd Armbrust (2011). If you have recommendations for bread-making books I should have a look it, please comment below.BACK TO TEXT

2 responses to The Meaning and Magic of Making Bread